Tales from the sketchbook an exhibition by Barek 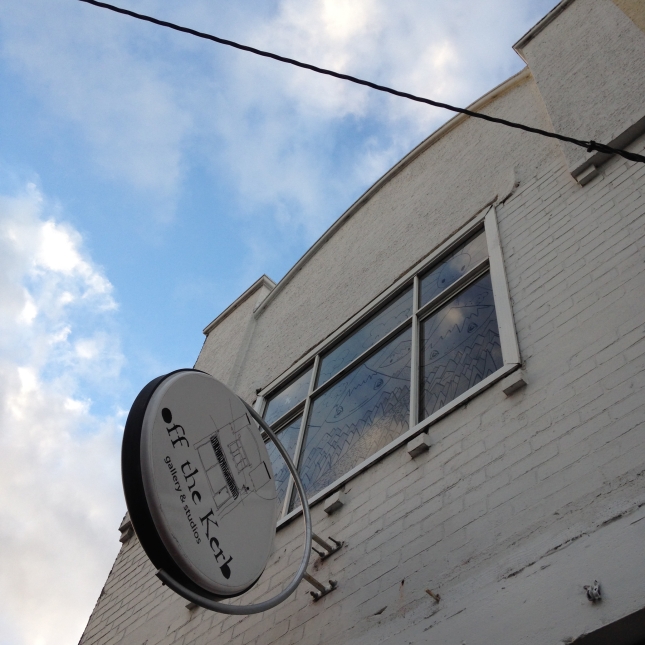 Barek is really quite an extraordinary artist. Today, I spent some time having a preview and a chat, at Off The Kerb Gallery  with Barek and Shini, the director of the gallery. Barek’s first exhibition in Melbourne called ‘Tales from the sketchbook’ will open on 17th October, 2014 at Off the Kerb and is just wonderful.

Barek’s art is recognisable by his signature character drawings. His drawings often depict a similar face, including the Barek eyes and round face. Yet, in this face, emotion is captured that invokes a certain empathy. This is how I came to the works of Barek, and still understand the art of Barek, personally.

Speaking to the director of Off the Kerb, I realised that there is a word that captures some of the feeling, and it is my favourite word; Melancholy. We held a shared understanding of melancholy as a beautiful concept. It can’t be universally defined, yet it invokes empathy. This empathy speaks to something we know, feel or have experienced. It is difficult to understand yet easy to feel.

Tales from the sketchbook

at Off the Kerb Gallery 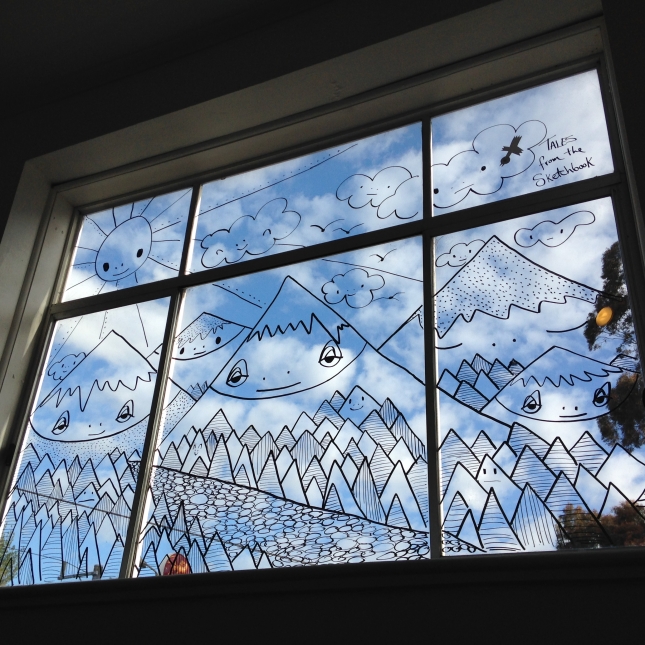 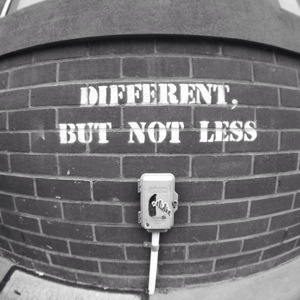 Chris Lilley’s latest offering has been aired on television and the result has been a backlash on social media with the hashtags #MyNameIsNOTJonah  #ChangeStartsHere and #ProudPoly. See the the following article for a background ~ Chris Lilley facing social media backlash over ‘racist’ Jonah From Tonga.

Firstly, I need to state, I support the challenge being made by people questioning the representation presented by Chris Lilley. Australia has a long history of comedy where people from a class of privilege are making fun of people from backgrounds of which they do not come from. Think of the Comedy Company, for instance, on air from 1988 to 1990 and the infamous character of Con the Fruiterer.

The polemics around this issue are important and further discussion around issues of representation, who creates representation and what meanings are imbued in these representations are pivotal to understanding how power and racism are intertwined and reinforced with stereotypes as represented by people who are not from these backgrounds.

Not being from the background is a crucial point in this discussion. You see, when I’m sitting around having a yarn with my cousins and joking about ‘our wog life’, this is very different to when a ‘whitefella’ uses the term ‘wog’ in his/her jokes. My cousins and I are proud of our backgrounds and our jokes are not imbued with a malice or derision of our ways. Instead there is an affectionate understanding of what it means to grow up in this country from a specific vantage point.

The invocation of stereotypes, by people who are not of that background, comes with a derision and malice. The tone of these representations is a put-down. Essentially, it is a position that looks down on the ‘other’, something to be ridiculed and laughed at. It comes from a position of superiority, by the class representing the ‘other’, and reinforces concepts of erasure of cultural identity whilst preferencing ideas of integration. Racist jokes end up being statements to the ‘other’ that we should become more like the dominant class and culture because they are better.

…ok so this is a start. Let’s begin… let’s talk about race and racism in all it’s manifestations because talking about it is better than pretending it doesn’t exist…

Book Review ~ The Promise: The Town That Never Forgets 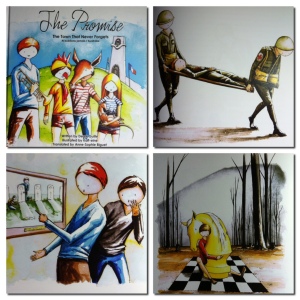 This non-fiction book depicts a century old relationship formed between a town in France, Villers-Bretonneux and Australia. The commitment to never forget the help provided by Australians, who saved them in World War I is expressed. Australia helped rebuild the town by providing some funds raised by school children in Victoria. Almost a century later, the people of Villers-Bretonneux returned help to Victorians after the bushfires that ravaged country towns. The article, ‘Bound by history, French children honour their debt’ in the Australian, provides information of the children from Villers-Bretonneux raising money to help rebuild the Strathewen primary school, and this is the event that forms part of the book.

Nelson Ferguson, a cornet player and artist, was a stretcher-bearer from Australia in Villers-Bretonneux, during World War I and suffered injuries. His grandson was inspired to travel on this journey and learn more about the town and the history. He invited musicians, from the Melbourne Symphony Orchestra (MSO) to form a brass band to play a private memorial at the Australian War Memorial, located just outside the village. Geoff Payne was amongst the musicians on this journey. Beyond the historical basis, of the connection between the two places, the book conveys a personal and emotional journey by Musicians from the MSO during a 2007 tour accompanied by the journalist and author of the book Derek Guille. It is the personal story of Geoff Payne that resonates with emotion in this journey. Whilst there, he discovers a photograph in the Memorial depicting his great uncles grave. The emotional impact of this discovery transfers to his ability to perform later that same day at the memorial.

I came to this book via a passion for the street art by the Artist Kaff-Eine. The artwork beautifully conveys the emotions depicted in the true story of the journey by musicians from the MSO in 2007 and it is the emotional connection that resonates. When Geoff Payne discovers a photograph a sense of feeling the shattering moment is captured in the artwork. The actual playing at the memorial heightens the emotional moment and affirms the enduring connection of the two countries. The artwork, by Kaff-Eine, is poignant in depicting the moments of emotion. The beautiful water-colour illustrations convey the story with a gentleness and contribute to the humanisation of this story about the harsh realities of tragedies and how they extend to affect people today.

This book was acquired for the school library and was placed on the display shelf as part of the lead up to ANZAC day. It is a bi-lingual book with the English story written on the top half of the page and the French translation written directly beneath. This contributes to relevance for Languages other than English (LOTE) programs in school, particularly if French is a subject studied. It is a great inclusion when exploring diversity and world connections with other cultures too.

Most non-fiction books, about history and war, in our collection depict prosaic iterations of history and its events. There aren’t many resources providing personalised perspectives, nor mapping a connection between Australia and another country over a significant period of time.

The Promise: The Town that Never Forgets, does not depict actual war experiences in detail, however moments are intertwined within the story of a modern day journey of musicians revisiting a town in France to play music at a private memorial. In the end it is a celebration of a connection formed during times of extreme situations. It’s a celebration of human bonding across borders and helps to make the world a somewhat smaller and friendlier place. It provides a faith in human capacity to provide support at times of greatest need.

Being able to review books, whilst working in a school library, contributes to greater knowledge of the library collection and assists in ability to provide recommendations to the school community about specific resources that are relevant to the curriculum. This book provides a fantastic avenue to explore the historical events mentioned by connecting with other available sources. Considering, History is now compulsory in the Australian Curriculum from Year 3 upwards, an evaluation of resources available in the library to support the curriculum is vital.

Bringing them Home: The ‘Stolen Generation’ Report was released in 1997. On May 26 1998 the First National Sorry Day commemerating the Stolen Generations took place. The official apology by an Australian Government occurred on February 13, 2008. Kevin Rudd as Prime Minister apologised.

Following National Sorry Day is National Reconciliation Week. Check out the website to see whats on and for school based activities visit the Reconciliation Australia School Resources site.

On the Murray River

Over a six week period I have been on the road across three eastern states of Australia and the Australian Captital Territory. During this time I did not blog and arriving back to Melbourne just over a week ago has presented a challenge of catching up before my studies commence in March. Often my internet connectivity was not good enough on the road and all I could manage was to upload a photo or two to Instagram with my mobile phone. This proved difficult as network speeds were very slow and sometimes non-existent, thus highlighting some of the connectivity issues in Australia and particularly when travelling on the roads less travelled.

However, despite connectivity being less than desirable, for our information age,  it was delightful to stumble upon artwork upon the way. From a yarn bombed tree, large sculptures in a small town, Lister in Bryon Bay and the Woden drains in Canberra, these are the artworks that are visible to smaller audiences.

In cities, such as Sydney and Melbourne, people can chance street art on a daily level and audiences are larger. In the outback, Street art is viewed by fewer people and stumbling upon a work feels special indeed.

Artists such as ROA have left works in very remote areas, such as the Pilbara desert and it’s a very fortunate experience to stumble upon such a treasure. More information about Roa in the desert can be found on The Pilbara Project. However, I didn’t have the opportunity to traverse the Pilbara and stumble upon ROA’s work but I did stumble upon other wonderful works on the roads less travelled and the places less visited.

Following is a gallery sample.